A Program Born of the Japan-U.S. Summit
Twelve Young Native Japanese Language Teachers to be dispatched to the United States 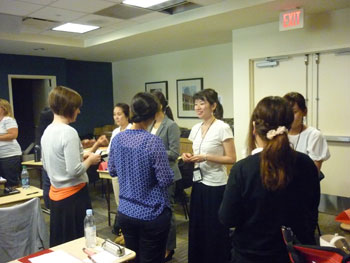 The Japan Foundation dispatched twelve native Japanese assistant teachers (ATs) to K-12 institutions offering Japanese language courses in twelve cities across the United States. They will be assigned there for two years on the Japanese Language Education Assistant Program (J-LEAP) until the end of July 2018.

Now in its sixth year, J-LEAP is a program that was launched by the Japan Foundation in 2011 as part of an initiative to strengthen US-Japan exchange programs for young people. J-LEAP was proposed during the Japan-U.S. summit in November 2010 between former Prime Minister Naoto Kan and President Barack Obama.  With Japanese language education programs expanding across the United States, ATs will assist with Japanese language classes under the guidance of Lead Teachers (LTs) for a maximum of two years.

After arriving in Atlanta on July 26th, the twelve ATs participated in a five day orientation until July 31st, and then departed for their respective host institutions on August 1st.  During the orientation, the AT’s were joined by their respective LTs, as well as the ten AT/LT pairs from the previous year.

At the send-off reception, the new ATs received encouraging words from Deputy Director Mr. Tomoki Sakuta of the Japan Foundation, Los Angeles. On behalf of year 5th year ATs, Mr. Seiji Arai (Waunakee, WI) expressed his appreciation for the support of all the LTs during the past year.

“I would like to deepen intercultural understanding between Japan and America and share my knowledge of the differences between Japanese and American culture/customs with students. I will also cooperate with my lead teacher to create classes that use the team teaching philosophy and I look forward to inspiring our students to become interested in studying Japanese.”

We will be publishing reports from two ATs every month in Breeze, starting in October, so please come back to read about their experiences!