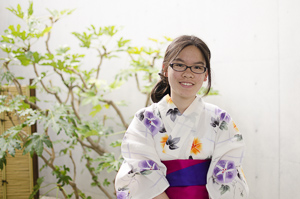 If, earlier this year, someone had told me that I would be going to Japan soon, I might have given them a look of apprehension and merely laughed it off.  But whatever it is that makes the world run on its own course – fate, perhaps – I found myself on a shuttle from the airport to LAX Hilton, where I met another participant and my first friend of the trip. It was then that I realized my dream of a lifetime was coming true this very summer.

What I think is the most wonderful about the JET Memorial Invitation Program though, are the experiences we get to take away from this trip. Had we gone to Japan as tourists, we most likely would not have visited the disaster area, and that is where I learned the most. Although media coverage of the incident in Japan was far and wide for a while afterwards, it quickly died down as the rest of the world diverted its attention elsewhere. As time went on, my Japanese teacher would show us pictures of the reconstruction that was happening in Tohoku every now and then. Although I knew the effort was going at a slow, but steady pace, I think that part of me automatically assumed that much of the area had been rebuilt already.

As such, it was a little jolting as we sat on the bus looking out on the window during our stay in Tohoku. Though much of the debris must have been cleaned up in the two years since the disaster, I could still see the ruined foundations of what used to be a residential area. Much of the land was covered in an overgrowth of weeds and wildflowers. In other places, we could see swaths of empty land where yellow backhoes were busy piling dirt into heaps so as to raise the height of the land in order to protect residents against future disasters. This was also when I learned that many people were still living in temporary housing, contrary to my expectations. I had long assumed that many people had at least been able to get new homes.

My most memorable moment while learning about the disaster was when we visited NEWSee, a local newspaper in Ishinomaki. We each were partnered up with a fellow student from Kobukan High School in Ishinomaki. Mr. Takeuchi, the Director of NEWSee, related to us his experience of hand-writing newspapers during the disaster. He and his co-workers had found some paper that wasn’t ruined, but because all machinery was down due to lack of power, they despaired as to how they were going to help provide news about the emergency to the locals. Not wanting to give up, he persisted and told himself that it was his job to continue writing newspapers for the good of others, and so he did. He managed to locate some markers and together with his co-workers, wrote many big newspapers which they would distribute to shelters so refugees could be kept updated about what was happening. Some of those same newspapers were still on display at their office.

When Mr. Takeuchi finished, he invited us to look at the newspapers. It looked like it had been written hurriedly, but I could see the care with which the writers took to make sure each word was still legible. I wondered how much time each newspaper took to write, and how hard it must have been when temperatures were low and their hands must have been numb with cold. Suddenly, my partner interrupted my thoughts.

“During the tsunami, my house was swept away.”

That jolted me out of my pondering. Even though it would’ve been obvious had I put more thought into it, it had never occurred to me before then that these students whom I was talking to must have suffered their own losses during the 2011 disaster as well.  They were my age, yet they were so strong. They must have lost family, photos, and other things important to them, yet they picked themselves up and continue to live in the present time, smiling instead of moping. Their tenacity continues to amaze me, and I am so glad I had the chance to meet them and learn from them. I was surprised at how open and willing they were about recounting their personal experiences.

In addition to learning about the Tohoku area, we also were given the chance to participate in homestays. At first, I was a little nervous when we were standing on the stage and waiting for our host families in Sendai to pick us up. I scanned around the room and spotted my host father, who smiled and nodded and me. I returned the gesture, heart beating faster as I excitedly whispered to my friends behind me that I had found my host family. My host sister, Nana, was very kind to me and noticeably excited about having me over. I learned that she was interested in studying abroad in Taiwan for college, so when we were out on the streets she’d often point at kanji on random signs and ask me how to read it in Chinese, whereas I would ask her how to read in Japanese. We both learned a lot of new words in that way.  She and her family took me shopping and we made a lot of wonderful memories together. When I had to leave, she and her mother were both in tears. We still keep in touch.

By the time I was on the airplane returning to the States, I was already sure that I definitely wanted to revisit Japan with my newfound friends. Since I moved as well this summer, I’ll be spending my senior year in a completely new high school, which doesn’t offer Japanese. Nonetheless, I’m resolute in my decision that I’d like to continue pursuing the language by self-studying. Even though I find myself to be the kind of person who tends to stops halfway on tasks that are not mandatory, I’ve decided that I really want to become fluent in Japanese someday, and so I will definitely work hard at this endeavor.  Someday, I’d like to meet up with my host sister again and hopefully she won’t see as many instances of me looking blankly at her when I don’t understand something!

When I got back, my friends were really excited about hearing about what I did in Japan, as were my family. Many of my friends took Japanese with me as well, so they were quite curious. I think if anything, they must have been shocked to hear about the extent of the damage that remains in Tohoku, but also surprised at how open and willing the people are about sharing their experiences with me. Residents of both Rikuzentakata and Ishinomaki remain steadfast in their dedication of rebuilding the area and making it an even better place, and I hope my friends shared the same enthusiasm as I did while learning about their plans.

Lastly, to Mr. Monty Dickson and Ms. Taylor Anderson, thank you so much for everything. The stories I heard about the two of you already inspired me before I even left for Japan. When I visited Tohoku, I saw the impression you left on others around you through your energy and enthusiasm in teaching. I had a lot of first experiences in Japan, whether it be riding a Ferris wheel, or wearing a yukata. I am so thankful that I had the privilege to meet your friends. 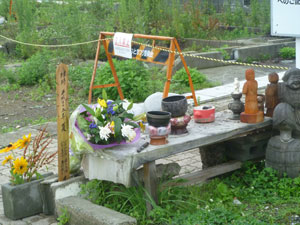 A memorial site set up by the trawler, Kyotoku Maru No.18, which was marooned during the 2011 tsunami. As we were walking around the area, surveying the remaining foundations of ruined houses and viewing the extent of the destruction, I met an obaachan, who kindly gave me some wildflowers she picked herself that morning. I left them by the memorial .