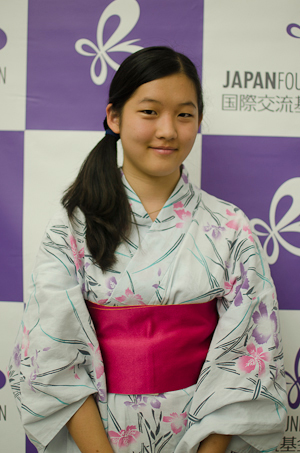 My time in Japan was a rewarding and unforgettable experience. Before I went to Japan, I heard how amazing and awesome Japan is from many of the JET assistant language teachers and past JET Memorial Invitation Program participants. The words “amazing” and “awesome” didn’t cross my mind until I actually experienced the beauty of Japan for myself.  Visiting cities, eating Japanese food, and learning more about the culture each day I was in Japan, opened my eyes to the beautiful allure of Japanese aesthetics and traditions. Looking at the ferris wheel illuminate in different colors right before my eyes and popping fireworks near the beach at night created memories that I’ll always cherish. I learned more about the Japanese culture and language in Japan than I had from studying in the classroom. My Japanese was also put to the test many times during my stay in Japan. Along with experiencing the beauty of Japan, I also saw how the tsunami affected many cities in Miyagi, and Iwate prefectures in the Tohoku region. Walking through the debris and looking at the destruction that the tsunami caused in Rikuzentakata, Ishinomaki, and Kesennuma, made me realize that there’s still much work to be done in those affected areas. The spirit and the fire in their hearts to move on and rebuild was such an inspiration to see. Before I saw the aftermath of the tsunami, I didn’t know the extent of the damage inflicted by the tsunami. I knew many towns and lives were destroyed but to personally see the piles of cars and the remains of buildings was devastating. I met local people and tour guides in each town and they all had a look of determination to build an emotionally and structurally stronger town. They shared their stories and showed us pictures of what the town used to look like. In Kesennuma, the tour guide led us to a boat that was washed ashore. The boat to the townspeople in Kesennuma serves as a reminder of death. Similar to the Hiroshima Nuclear Bomb Memorial, many people want the boat to be a symbol to the world of the March 11th disaster. One of the volunteers asked us to think about how the boat can be a symbol and represent the disaster.  I walked around the boat and looked at the scenery and I got the feeling that the boat could symbolize hope. The boat was a symbol of hope to build a better city and to better prepare for other natural disasters. When the Japanese townspeople were asked “What can we do back home to help with the disaster efforts?” many of them said to share what happened on March 11th. They wanted us to explain to our friends and family what we saw and learned in Japan. As I was walking along the beach in Rikuzentakata, the tour guide showed us a pine tree. The pine tree was the sole survivor among some 70,000 pines which were swept away after the tsunami engulfed the region. The tree represented the residents’ dream of a new beginning and like the boat was a symbol of hope. Many of the Japanese people lost everything so to see one pine tree survive the tsunami was remarkable. The emotions seen on the people’s faces as they told their stories helped me realize how the tsunami affected the Japanese people emotionally. The pine tree is not only the botanical symbol of rebirth, it’s a reminder for the residents that every morning begins a new day of hope. Through the JET Memorial Program, I was able to meet students who shared my passion for the Japanese culture and language. This program has helped me experience the Japanese language and culture and personally see the dreadful effects of the tsunami.  Moreover helped me realize how the tsunami affected the Japanese. I would like to visit the three disaster affected cities in the future and help with the recovery efforts.

The experience I had in Japan has helped me realize what I truly want to study in college. I plan to pursue a major in global affairs and a minor in Japanese studies. Not only did my experience help me realize what I want to study but it has also helped me to realize what I want to do in the future. After I finish college, I plan on being a JET Coordinator of International Relations in Japan and later on become an international lawyer. Although my experience in the Japanese culture and language has been limited so far, I'd like to take my perspectives and revolutionize my broad view on both the world and my Japanese studies. Japanese has not only opened my eyes to the power of languages but it has also broadened my horizons of different cultures. I want to bridge the gap and connect the two countries in friendship and promote world peace through my personal experiences. I want to take the initiative to build bridges between cultures, nations, states, schools, students, and the world community. The bonds that I made during the short time I spent in Japan have helped me understand how I can make a mark and create a bridge in the United States to spread the Japanese culture and language.

I hope to take the same spirit that Monty Dickson and Taylor Anderson had in the Japanese culture and language and continue to strengthen the relations between the United States and Japan. Monty’s and Taylor’s life story is such an inspiration to people who have a passion and an interest in learning languages. Both of their lives have helped students like me be able to go to Japan and give me the determination to continue my Japanese studies. Thank you for encouraging each and every one of us to carry on Monty’s and Taylor’s dream of cultural exchange.