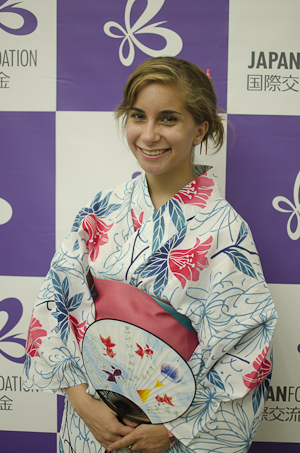 When I was first selected for this 2012 JET Memorial Invitation Program, I couldn’t believe it. It was a dream come true! I got to go to Japan, what I’ve been wanting for years. Little did I know how much of an impact this trip would have on me.

The trip in Japan consisted of going to tsunami devastated areas in the Tohoku region, taking classes, roaming around Osaka, and a homestay with families in Osaka. Each portion of the trip brought something different to the table, and they were all important in separate ways.
The places we visited in the Tohoku region were Sendai, Rikuzentakata, Kesennuma, and Ishinomaki. Rikuzentakata and Ishinomaki were the towns that Monty Dickson and Taylor Anderson lived and taught in, respectively. Our first stop was Rikuzentakata. There, we met elementary school students who had been affected by the tsunami. Despite the difficult past and difficult reconstruction process the children faced, they were beaming with excitement at the prospect of meeting us! They made us feel welcomed, and were well prepared for our visit. They had English presentations prepared, as well as speeches in Japanese. We had quizzes for them to answer, and we played a Finnish dancing game that included rock scissor paper. I wish we had more time with the students, because their energy and excitement really inspired me. I don’t know if it’s the drive of the Japanese culture that the children had grown up with, or childhood innocence that kept their ideals and goals so pure, but they were just a few of the many inspiring people we met on the trip.

I’m not quite sure why, but Rikuzentakata stuck with me the most. From the Sports Complex that the tsunami ripped the back wall off of, to the 70,000 pine tree strong beach that the tsunami swept away, leaving only one tree as a symbol of hope for the citizens of Rikuzentakata, to seeing the last places where Monty Dickson was before he lost his life, Rikuzentakata was filled with tragedy stricken areas. On our first sight of Rikuzentakata, our normally loud and song-filled bus went dead silent. It was very uncharacteristic of us, and that shows just how different Rikuzentakata looked from the surrounding areas we had been driving through. Everywhere we went, we were welcomed, even though I felt like we were intruding in the civilians’ intimate lives. I felt a strong resolve after visiting the Tohoku region to share my experiences with everyone I knew, and I have been, since I returned.

It was in Osaka, though, where I felt my desire to continue learning Japanese grow. From the language classes at the institute that taught the group Osaka-ben, to staying with a Japanese family and having to rely completely on my Japanese skills, I decided that I needed to learn more of the language I’ve been studying. Merely getting by was no longer enough. After being in Japan for two weeks and experiencing the many difficulties that come with being in a foreign country, I plan on studying Japanese for as long as I can, maybe even the rest of my life. This trip has changed my motivation in ways that I can’t describe, and I look forward to sharing my stories with everyone I can.

I have shared a few stories already. My family has heard them the most. As I told my dad about Taylor’s and Monty’s legacies they left behind, and I showed him pictures of them and where they lived and worked, I could tell my dad really understood how I felt when I learned of all this information. I sat there, and really couldn’t find the words to describe how I felt sharing all that information and thinking about it, and I don’t think my father could either. If I can reach others with my experiences in the same way I communicated them to my dad, I think I can help make a difference and help Japan and the United States’ relationship, and continue being a bridge between the two countries that I love so much.

Finally, I’d like to send messages to Taylor and Monty.

We’ve never met, but I feel as though I’m close to you both. Taylor, from what your parents have shared with the group and from what I experienced in Ishinomaki, stories the Kiwi Club told us, and experiencing the town you lived in first hand, I feel as though I have a bond with you that is special.  Monty, I can tell from what your sister and brother told us that you were loved immensely. When we were in Rikuzentakata, I felt the reality of the situation, a person who loved Japan just as much, probably more than I did, lost his life doing what he loved. It’s admirable, both you and Taylor passed away doing what you both had devoted your lives to. You both have left behind legacies that all 32 of us, and everyone who is inspired by your stories, will carry on the rest of their lives. I now know that my life’s meaning is to continue your legacies, and start my own. I want to go to Japan now, and do what I love. I want to devote my life to a cause that my heart says it worthy, and it’s because of you both that I’ve found my drive in life. I thank you, from the bottom of my heart, and I hope that you’re happy, knowing that you and the lives you led, and your goals, will never be forgotten.

Thank you Japan Foundation, the parents of Taylor, the siblings of Monty, my host family, the staff at Hotel Boyo in Kesennuma, the students of Senboku high school, and everyone who showed me the best experience of my life. I feel like there aren't enough words in the English language to talk about how much this trip meant to me; I wish I could repay you all with everything I’ve ever had, but until I can, I will continue studying Japanese and continue the building of the “Nichibei-kakehashi,” the Bridge Between Japan and America.

Japan, do your best! 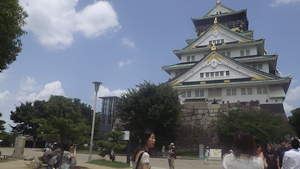 "Japan: The Perfect Mix of Traditional and Modern"

Osaka Castle, with elevators to bring the people from today to enjoy the history of the castle.