Participating in the JET-MIP program is one of the best experiences of my life, including the time I spent living in Japan. When I lived in Okinawa, I spent my time on military bases and didn't learn much Japanese. But this trip allowed me to use my Japanese language skills and taught me a lot about Japanese culture. I have wanted to go to Japan and speak Japanese there pretty much since I started learning the language three years ago. I thought that I would have to wait until college to have the language skills and means of travel to accomplish this goal. JET-MIP gave me the opportunity I needed to fulfill my dream, and the experience was better than I ever imagined.

I've never been good at making friends over the internet, so I didn't chat much with the other members until we met in California. One of my biggest worries was that my Japanese skills would be far behind everyone else's. After all, I was one of the nine rising seniors in our group, and I knew some people were able to start learning the language at an earlier age than me. But when we all met, I was relieved to find fellow seniors, and most of us had a similar level of Japanese knowledge. We started to bond during the preparations and by the time we got to Japan, many of us had already become close friends.

The first few days in Japan were very interesting. For most of the group, it was their first trip to Japan, and it was the first time outside the country for plenty of the members. I enjoyed seeing their reactions to everything since I'm used to flying internationally. When we got to the Institute, we were given tours and explanations in Japanese, but we were all tired from the 11-hour plane trip, so we (or maybe just I) got half of the info and just nodded along. I loved the Institute. The facilities are so convenient, and the rooms are perfect. We had a day of orientation there then headed for Tohoku.

Seeing the cities that were affected by the tsunami had a powerful effect on all of us. We were shown around by people who survived the tsunami and they had many stories to tell. It is devastating to see firsthand what kind of damage can be done by water. A huge ship was carried into the city of Kesennuma. A forest of 70,000 trees in Rikuzentakata has been reduced to one. We also saw where Mr. Dickson was last seen and where Ms. Anderson's body was found. It was very sad to see the destruction in the towns, and the experience has made me want to help in any way I can. And I already have; our whole group has helped just by talking.

The members of our JET-MIP group participated in the first US-Japan High School Summit, where we met up with high schoolers from Tohoku and talked about how to help affected cities and how to strengthen the bridge between Japan and America. The summit was a lot of fun, and it felt great to know that we could make a difference even though we're teenagers from another country. We also had a similar talk when we visited the American consulate in Osaka. We talked about being bridges between America and Japan and how that can help the two countries.

Another important thing to note about the trip to Tohoku was the spirit of the people. Their cities may still be in need of repair, but the people who live or used to live there are thriving. They are happy and inviting and always willing to help. Maybe the only way they could help was to share their story of the tsunami, but I always thought of how brave they were to recount the horrific event and still smile for us when their tale was over. It was so inspiring to see so many people say "yes, my house is gone and I lost some friends, but I'm just glad you all are here." Because they really did say that. They've gone through hell and they're brave and kind enough to relive that in order to let us know what the tsunami was like to them. I have the utmost respect for all of the people in Tohoku who go on with their lives and leave the past behind them. And I am so grateful to all of the people who shared their stories with us.

But there were plenty of happy times there as well. We wandered around Ishinomaki where there are tons of manga-themed statues and buildings and things. We also toured Sendai with the help of some local college students. Both were really fun because we got to see so many interesting things and buy cool souvenirs. We also visited a few elementary schools, which was so much fun! We got to play games with and talk with the elementary students who were so adorable!

Back in Osaka, we had a few lessons and preparations and plenty of free time. I spent most of my free time on my computer or shopping in Rinku town. Rinku town is fun to walk around in with people. I hate shopping alone, but it was pretty fun to go with different groups of people. I spent most of my money at the arcade playing crane games. I had fun trying out different machines, and I actually won a couple things. But I always felt upset as soon as I left and realized how much money I'd spent…

Everyone had fun during their home stays. I spent most of mine cheering on my host brother at his three basketball games. I don't generally like sports, but I loved watching Kaisei play. I found time to go to the Pokémon center in Osaka city where my host family insisted on buying my things for me. We also went to a Bon Odori, which is pretty much a community dance party. They dressed me up in a yukata, which they later gave to me as a present, and we danced and talked and ate shaved ice. It was lots of Fun and a nice way to see some Japanese culture.

The rest of the trip was work and free time and a completion /sendoff party which was cool because our host families got to come and we sang and danced. When we got back to Los Angeles, we had our final presentation. I called in sick. I wasn't trying to avoid my presentation. I was shivering with a jacket on and got a stomachache. I felt better in time to catch the end of my group's presentation and get my certificate and hear the speeches. I made a (really lame) speech to make up for missing my presentation. When I was on my way home, I was mostly happy to see my family again, but also sad to leave Japan and my new friends. But I'm sure I'll visit Japan again, and I think some of us will find a way to meet up in the future.

To speak generally and sum up, it was a fun trip and I learned a lot. I highly recommend this program for anyone interested in Japan and connecting it with America. This trip has definitely inspired me to continue to be a bridge between the countries by sharing my experiences and telling the stories of the Tohoku region. I've also been inspired by the JET Assistant Language Teachers we met and look forward to becoming an ALT myself. I think that's a great example of how I can connect America and Japan.

I had always planned on continuing to learn Japanese during senior year and college, but this trip gave me some much-needed confidence and opened me up to opportunities such as study abroad programs and the JET-ALT position that I can use to further my studies and test my abilities.

And to Montgomery Dickson and Taylor Anderson, the only thing I can think of to say is that I'm sorry your time was cut short, but I'm glad that you both had a great time learning Japanese language and culture. Your legacies provide inspiration to me and others to pursue our dreams and enjoy Japan to the fullest. Thank you. 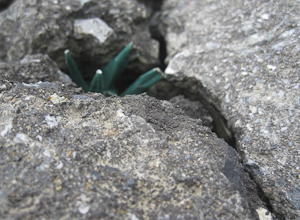 I thought that this crane was very symbolic. Even though everything around was bare and broken, there was a crane hiding in the rocks. Paper cranes symbolize hope, so I took it to mean that no matter what happens, you can always find hope and count on it to pull you through the bad times.