A Free E-Newsletter for Friends of Japan & Teachers of Japanese

Greeting From The Director

It has already been one year since the 2011 Great East Earthquake and Tsunami devastated Japan and this month, there will be many events held in Southern California commemorating the one year of this tragedy. The Japan Foundation is organizing the Taiko Concert "Arigato from Japan," which will travel to eight cities in three different countries around the world. We kicked off the tour in Los Angeles to show the appreciation of the Japanese people, especially those from the Tohoku area, for the support of the American people during the crisis. If you were not able to attend this event, there will be other events where you can show your support for Japan in the coming days so I hope you will take this opportunity to experience Japanese culture in Southern California and other cities across the United States.

Applications for the 2012 JET Memorial Invitation Program for US High School Students is now available for download on our website. Please make sure to thoroughly read the Program Announcement before starting your application. There are a few new requirements this year so if you applied last year, make sure to take the time to read about the changes. The deadline this year will be on Friday, April 13th, 2012, so all applications must arrive at our office by that date. If you have any questions, feel free to contact the JET-MIP coordinator.

The "ABEYA" Tsugaru-Shamisen US Tour
In honor of the Japan-U.S. Cherry Blossom Centennial

A century ago, the city of Tokyo presented Washington, DC with a gift of 3000 cherry blossom trees that were planted around the Tidal Basin. These trees have flourished during the past 100 years and has transformed the appearance of Washington every spring, as a reminder of the strong friendship between our two countries. To celebrate the Japan - U.S. Cherry Blossom Centennial, the Japan Foundation, Los Angeles, will invite ABEYA, Japan's top Tsugaru-Shamisen Performance Ensemble, for a six city West Coast tour. The tour will kickoff in Los Angeles (4/9) followed by performances in Portland (4/12), Seattle (4/13), San Francisco (4/14), Denver (4/17), and Honolulu (4/19). We hope you will come out to support us for this historic occasion. More information will be available on our website shortly.

Completion of the First Ever JF Nihongo Courses

This month marks the completion of the first series of JF Nihongo courses in Los Angeles. A total of four classes were offered from a basic Mastering Kana class to a more advanced Business Japanese class and many of the inaugural students were very satisfied with the course curriculum and are eagerly waiting for the next series of classes to be announced. We are currently working on the curriculum for the spring courses, which we plan to start in mid-April. Please check back on our website in mid-March for more information. We thank all our students for their support in making JF Nihongo a success.

Messages for Light Up Nippon

The Japan Foundation has setup a website allowing users from all over the world to leave a message of support and design a virtual fireworks display for the people who were deeply impacted by the Great East Japan Earthquake in 2011. This project is intended to collect as many messages as possible from all over the world in conjunction with custom fireworks designs, which have the meaning of requiem for those lost and prayers for restoration. In addition, the Light Up Nippon project is also accepting donations for fireworks that will be used this summer to light up the night sky in as many as possible in the affected areas. We hope you will take the time to write a message and create a fireworks design for Japan.

Hello. My name is Mitsuhiro Tanabe and I work as an assistant teacher at Roosevelt high school, in Seattle, Washington.

My name is Eri Sonohara and I am a teaching assistant at Clarkstown High School North and South in New York. Clarkstown is located 25 miles northwest of New York City in a very beautiful suburb with mountains and lakes.

First I would like to talk about my school. I travel back and forth between the two high schools by car. I participate in 5 classes a day with a total of about 80 students. I am mainly in charge of the class of freshmen and sophomores. Students are supposed to choose one foreign language at middle school in our school district, so freshmen already have some language skills. High school students study academic Japanese. 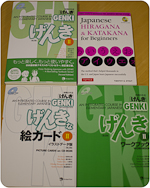 This month, we have some new Japanese-language books in the Nihongo Library.

This is the fifth part of an eight part series that will highlight the experiences of 32 participants of the 2011 JET Memorial Invitational Program. Through this program, participants travelled to Japan in July of 2011 for a 10 day exchange that focused on Japanese language and culture with the purpose of fostering friendship and goodwill between the youth of both countries. This month, we will be featuring the essays of Eli Jones, Theresa Tran, Eurico Senna, and Debbie Daniels.

The JLPT Administration Committee sent out all test results for the 2011 JLPT on Friday February 24, 2012. If your results are returned back to us, we will contact you to verify your address.

On Friday, March 2nd, 2012, the Japan Foundation, Los Angeles, in cooperation with the Consulate General of Japan in Los Angeles, organized the event "Arigato from Japan: Overcoming the Disaster" at the Music Theatre's Ahmanson Theatre in downtown Los Angeles. This is one of the largest events organized by our office with a group of over 40 performers and supporting cast members and an audience of over 1400 guests. The evening kicked off with a moment of silence for the victims of the 2011 Great East Japan Earthquake and Tsunami led by Director Misako Ito of the Japan Foundation, Los Angeles, who was also the MC for the event. This was followed by speeches by several guest speakers including Consul General Nimi of the Consulate General of Japan in Los Angeles, Mayor Ronald Loveridge of the city of Riverside, and Deputy Chief Terry Hara who presented Consul General Nimi with a Certificate of Recognition, from the City of Los Angeles, for the event. There was an eight minute video, after the speeches, showing the people of Japan expressing their thanks to the US military and other emergency response teams from all over the world who flew in to help with the recovery efforts immediately following the March 11 disaster. The performance started after Kagura, a folk dance from Tohoku, with Ondekoza taiko and Bamboo Orchestra. This event was a huge success with all the available tickets given out a week before the event and all the attendees gave excellent reviews of the concert and were all very grateful for the opportunity. We hope to have more events in the future so please check back frequently to view our events calendar.

This month, we would like to welcome Rei Suzuki, who will take over as Deputy Director of the Japan Foundation, Los Angeles. Rei has been working for the past 15 years at the Japan Foundation Headquarters, Rome, and Osaka in various fields including support for Japanese language education worldwide. She looks forward to meeting all our supporters at a future event. We welcome her to our family here at JFLA and look forward to working with her for the next few years.