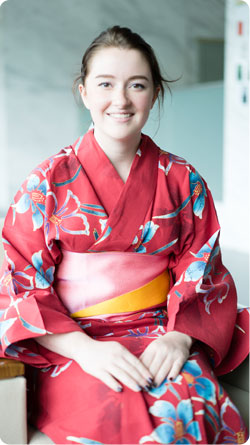 I was so nervous at the beginning of this program because I didn’t know if I would make friends and I was worried about not living up to the expectations put on me. However, I had nothing to worry about. Our first day in L.A. we got to know each other by learning everyone’s names. The second day we heard presentations by Monty Dickson’s and Taylor Anderson’s family and they were so heart wrenching it was impossible for me not to cry. After our orientation at the Japan Foundation, Los Angeles, we headed to the Official Residence of the Consul General of Japan in Los Angeles and had a beautiful dinner and reception there, followed by a Rakugo performance. As we left for the airport, everyone was buzzing with excitement because we were on our way to Japan!

Before the Tohoku tour, my feelings towards being in Japan and in this program were a bit self-centered. I wanted free time to explore the area around the institute and to try the different foods available. When we started the tour in Rikuzentakata, however, I realized that this was so much bigger than me. We arrived at Kesen Jr. High School and the principal there talked about how the tsunami and earthquake affected the school and the area. When he said that many of the kids there had lost one or both of their parents, it really shocked me. The children there were so happy and lively; I didn’t see one sad face the entire time. He also said that there were a large number of children living in temporary housing still. I would have thought that the town would have built new housing by now, since it has now been almost five years since the disaster, and I was shocked again at how far Rikuzentakata still has to go in their rebuilding. During our time in Rikuzentakata, we stayed at Hotel Boyo which was a beautiful Japanese-style hotel. It had an onsen and Japanese style rooms where we slept in a futon on tatami mats. Mr. Kato, the owner of the hotel, told us of how he took in victims from the area and housed them for several months which I think is amazing. In Ishinomaki, we went to Watanoha Elementary School and met with fourth graders and saw Taylor's Reading corner built by Mr. Endo. Mr. Endo was a carpenter in the area and he lost his wife and his three children in the tsunami. He also built a playground called the Rainbow Bridge monument which was dedicated to his children and all of those lost in the tsunami. That night we met with the Kiwi Club members and I had a great time talking with them and hearing their stories. Our last activity in Tohoku was meeting with students at East Sendai High School where we experienced kendo and sado (tea ceremony). The students we met were extremely friendly and we all had a lot of fun spending the day with them.

One of my favorite parts of the trip was the home stay and meeting my host family was so nerve wracking for me. I was terrified I would mess up or insult them with my lack of cultural knowledge but they were completely accepting of me. We went to Universal Studio Japan and rode the Harry Potter, Spiderman and Jaws rides. Then after my host mother made us 手巻き寿司 or hand-rolled sushi which was so delicious! On my second day with them, we went to Kyoto and rented yukata. We were able to wear these beautiful yukata all day and we walked all over even though it was very hot outside. We had dinner at an okonomiyaki restaurant before they brought me back to the high school to say goodbye. Saying goodbye to them was one of the hardest parts of the trip for me. I ended up crying which made my host sister also cry. I hope to visit them again and I want to remain life-long friends with my host sister.

The schedule during this trip was jam packed full of events and activities but it also allowed us to have free time in the evenings. Some of my best memories are of biking to Rinku-Town, walking around the shopping center and perusing through the convenience store. It’s crazy to me that during those short 19 days I was able to make such strong friendships. When we said goodbye to one another on our last day, everyone was crying and hugging and promising to stay in touch. For the few days after I had gotten home, I would constantly get notifications that someone from this group was calling for a google chat because we were all missing each other and Japan. Japan truly felt like a home to me in those 19 days and I know that I will be back in the future.

One of the most lasting effects this program has had on me was that it helped me overcome my fear of talking to others in Japanese. Before going to Japan, I would never have been able to strike up a conversation but I now love being able to walk up to others and talk. Being in Japan has solidified by desire to continue learning Japanese and to make more connections in communities all over the world. I am so ready to start college and learn from my teachers and classmates. One of my hopes is that I can participate in the JET program after I graduate. I want to teach and inspire others as Monty Dickson and Taylor Anderson did.

To Taylor Anderson and Montgomery Dickson, I would want to tell them that they have left huge impressions on this world. Their families spoke of how bright and happy they were and how dedicated they were to learning about Japan and its culture. I really wished I could have met them because of how people speak of them. I think the best way to remember them is to live life to the fullest and continue our path for learning Japanese. 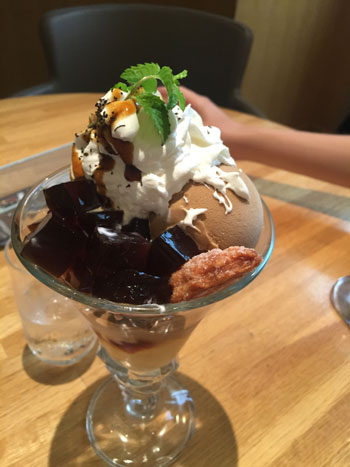 While we were in Sendai, Claire and I went to a very cute cafe and ordered two parfaits. Mine was a black tea parfait and hers was a chocolate parfait. They were so delicious and were filled with ice cream, mochi and jellies. I chose this photo because this parfait was amazing and I really wish I could have this here in America.