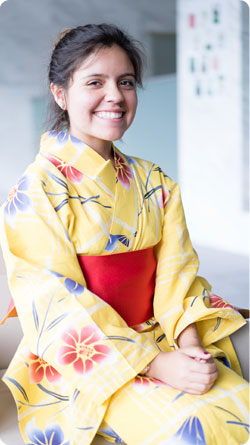 From biking around the city of Osaka, to playing Ninja with Japanese elementary school students, to visiting the disaster areas in the city of Rikuzentakata, my stay in Japan consisted of a variety of newfound experiences. Although saying that the program was “great” is far from sufficient, I can say with confidence that it was the best experience of my life so far. When my sensei told me about the JET-MIP program during January of my senior year, I was beyond excited and promised myself that I would make my dream of visiting Japan a reality. Now, thanks to the Japan Foundation, that dream of mine has not only come true, but developed into an even bigger one for the future.

On the very first day we arrived in Japan, we had the freedom to simply explore the city of Osaka on our own. I remember biking to different convenience stores and Rinku town (a shopping center near the institute), and walking along the beach just a few hours after we arrived. I felt overwhelmed—constantly thinking to myself, “I’m literally IN Japan!” It was a feeling I will never forget.

As early as the moment we stepped into the Haneda Airport in Tokyo, I began to notice cultural differences between America and Japan. Speaking to airport officials, which is often times somewhat nerve-racking, was surprising as we were treated with extreme politeness. As we walked around the airport shops and restaurants, it never failed that we were greeted with a smile and an "いらっしゃいませ" ("welcome") as soon as we walked in. We continued to notice this throughout our entire stay in Japan. When another Mipper and I lost our way around Sendai, the store clerk we spoke to was more than willing to help and give us directions. Another surprising aspect was the fact that we weren't expected to pay gratuity in restaurants as we do in America. Although the importance of customer service and satisfaction is more strongly emphasized in Japan, they don’t expect any type of reward or tip. In my opinion, this reveals a lot about the humility and hard-work ethic of the Japanese people which I have grown to admire more.
During my visit to Tohoku, the core part of the trip, I gained valuable new knowledge, experiences and friendships. We had the opportunity to visit a few different cities affected by the 3.11 disaster, including Rikuzentakata, Kesennuma, Ishinomaki, and Sendai. Bussing from city to city in the Tohoku region allowed me to see the vast greenery that covered the landscape—a sharp contrast between the more industrial, city-like area of Kansai. The spoken dialect between both regions also differed greatly. Although I didn’t think about it much at the time, I am glad that I was able to experience two completely different areas of Japan.

In my high school Japanese class, I had learned all about the differences between 和室 (Eastern-style) and 洋室 (Western-style) living. I was pleasantly surprised to recognize many things I had learned about when we entered our bedrooms in Hotel Boyo, which were of a traditional Japanese style. This hotel in Kesennuma was greatly affected by the 3.11 disaster, so much so that many of its facilities were no longer usable. The owner of the hotel spoke to us about his disaster experience, and we learned about the role that hotel played as a temporary home for construction workers immediately after the earthquake. Just a few blocks from the hotel was a small bakery owned by an elderly lady, with whom we spoke to about her experience in 3.11 as well. She was extremely kind and open—even bringing out a photo album and showing us how badly her bakery was affected by the disaster. Although the people of Kesennuma had gone through so much, it was nice to see how kind and open they were about sharing their experiences with us.

As we visited Rikuzentakata and Ishinomaki, both cities in which Monty Dickson and Taylor Anderson taught, I witnessed first-hand the grave impact the disaster had on the cities. We visited various disaster areas, including “The Lone Miracle Pine”, which is the one tree left standing in Takata Matsubara after the tsunami wiped away the other 70,000 trees. During the U.S.-Japan Rikuzentakata High School Summit, we met many Japanese high school students with whom we visited various temporary buildings around the city and discussed ways in which they could be improved. We also met with the mayor of Rikuzentakata, learning a great deal about his plans for rebuilding the city. To me, this was one of the most important parts of the trip because we were able to give our own thoughts and opinions on disaster prevention and recovery.

Our next and final stop on the Tohoku trip was Sendai. I immediately noticed the difference between Sendai and the other places we had visited—it was more of a bustling city with shopping malls and restaurants on the corners of big streets. I was super excited to visit my first department store in Sendai—another aspect of Japanese culture I had learned about. I’ll never forget exploring the city during free time—bowling, riding the swings in a small park we discovered, or eating at Mister Donut. I experienced my favorite high school visit in Sendai, at Sendai Higashi High School. It was special to me because I immediately felt a connection with the high school students, laughing and joking as we enjoyed our lunches. We also were able to experience kendo and traditional Japanese tea ceremony, both important aspects of modern and traditional Japanese culture. Leaving Sendai was one of the most difficult parts of the trip, but I’ll never forget the memories I made and the people I met there.

Soon after returning to Kansai, I experienced my first homestay in Japan. It was amazing. Although I was a bit nervous beforehand, my homestay family was incredibly nice and welcoming. I was lucky enough to ride the train multiple times with them on our way to and from Kyoto. I was in awe as they took me to visit Fushimi Inari and Byodoin Temple, both beautiful and historically-rich places in Japan.

Throughout the program I had the wonderful opportunity to meet so many new people, whether through my homestay, school visits, or dinner exchanges. I am beyond glad that I was advised to make both business cards and a Line account before the program began, because I’m now able to communicate with many of the people I met. Although it was a tearful goodbye with my host family and other friends at the farewell ceremony, I made lifelong friends with whom I could reconnect when I visit Japan again in the future.

The last few days of the program were bittersweet—as we had to say goodbye not only to Japan, but to each other. These are friends with whom I did karaoke until midnight. These are friends with whom I experienced an onsen for the first time, and with whom I freaked out about not knowing how to call for a taxi in Japanese. The return home was difficult, and although I wished that the program could continue, I remembered how fortunate I was to have been given such an opportunity in the first place, and with people as amazing as the 31 other Mippers. The generosity and vision of the Japan Foundation is truly remarkable, and I could never express how thankful I am to have been chosen to participate in this program.

Throughout the span of my two weeks in Japan, I was required to use my Japanese skills more than I ever had before. I realized even more how much I love speaking the language—it felt amazing to be able to communicate with students who knew little to no English. I now feel more motivated than ever to continue working on my Japanese skills. Furthermore, through the experiences I had in Japan, whether by meeting new people or learning more about the culture, I have developed my dream of working in Japan in the near future. JET-MIP has influenced me to not only continue improving my relations with the Japan and its people while in college, but to apply to be a JET soon after.

As an aspiring JET, I hope to make a difference in the lives of those I meet in Japan, just as Taylor Anderson and Monty Dickson did. And so to them: I would most of all like to say thank you. Thank you for being brave enough to pursue your own dreams, despite the difficulties you might have faced while doing so. You have served as an inspiration for me, my fellow Mippers, and countless others who wish to build a future upon a love for the Japanese culture. The profound impact you had on the people of Ishinomaki and Rikuzentakata was evident as we visited both cities. I truly admire the kindness, care, and dedication you showed for the people of Japan, and hope to one day emulate your example. 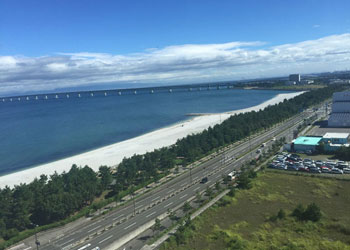 “A Tuesday in Kansai”

I took this picture on the day before we left Japan. It serves as a nice remembrance of the city I called home while I stayed in Japan and in which I made countless memories. I hope to return to this area one day, and reminisce on the JET-MIP days.