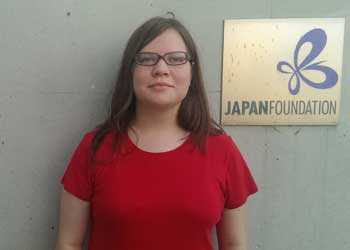 This was definitely a once in a lifetime trip, one that I will never forget. My impression of this program was most certainly a good one, for I can honestly say that if I had the opportunity to do this again, I would in a heartbeat. The people that had been introduced to us JET MIPpers have been the kindest and most wonderful people to meet.

My experiences all began at SeaTac Airport, where I first stepped towards the gate from Washington to Los Angeles. I couldn't tell if I was more excited than nervous: this was my second plane trip ever, and I hardly knew the MIPpers that would be on the plane with me. I've never been to California, and I certainly never been out of country before. I was a little worried about how the other MIPpers would think of me, if they would like me, and if I was going to make any friends. We met at the gate, and got on the plane when it was boarding time. Eventually, I realized that all this worry was for naught, as everyone had started to get along and began to know each other right away while we waited for our keys in the Fourpoints Hotel lobby in LA.

Of course, this was only the beginning. The real challenge was getting over my nerves for Japan. I felt that everyone was more skilled in Japanese than I was, making me worry that I wouldn't understand half of everything said in Japan. I was only partially correct: I understood a good two thirds of what was said throughout the trip, and nearly everyone was just as nervous about their Japanese skills as I was. The tours were some of the best parts of the trip, because I got to personally see Japan and what it is really like. Nara was the most memorable tour for me: I had never been so close to a deer before or thought that I would like takoyaki so much. The atmosphere was really peaceful, and had almost a country feel to it.

Although I enjoyed the tours and the classes, my favorite part of the trip (and likely for most of the other MIPpers) was probably the homestay. I will never forget those two days that we spent together, I will also never forget how to eat somen thanks to “Miho-Sensei”. I want to thank them for all they had done for me, and thank them for how welcoming they were for me.

During the trip, our friendships grew. Of course, everyone had his or her personal close friends, but everyone was comfortable with everyone by the end of the first few days. We all were nearly or actually were in tears on our last day, since we had become so close to each other and knew that it was possible we wouldn't see each other again. I think that this is part of the reason that I want to apply for the JET Program, since other MIPpers have thought of it as well. We might see each other again in the place where we have all grown close to one another: Japan. I would love to go to Japan again, and help be a part of the bridge between the United States and Japan. I will either take a Japanese class in college if possible, or transfer to another school so that it can be my major or minor after the first year.

When I shared my experiences with my family and friends, they all were surprised by how similar Japan is to the United States, as well as how different Japan is. When I told them about the reconstruction and rebuilding in Japan, they were impressed by how much was done and hope to see more done there, and that Japan will thrive.

In conclusion, I acknowledge the fact that none of this would ever have happened if it wasn't thanks to Taylor Anderson and Montgomery Dickson, who had sadly lost their lives in 3/11. I would like to say to them that I admire them and that they inspire me in the most sincere way. That they had made an impact on not only me, but to the people that knew them. Both had amazing qualities that made them likeable: they were hardworking, fun loving, and passionate about their place in Japan. I want to say to them that I want to be like them, to have those qualities and be able to share them with others. Thank you, Taylor Anderson and Montgomery Dickson, for all that you’ve done and all that you’ve inspired.

I also want to thank the Japan Foundation for allowing me to go on this amazing trip to meet and learn about all these amazing people, to learn about Japan, allowing me to help build a bridge between Japan and the US, and helping me build confidence not only in Japanese but also in building connections with people. Arigatou gozaimashita, and sayonara for now! I hope to meet everyone again! 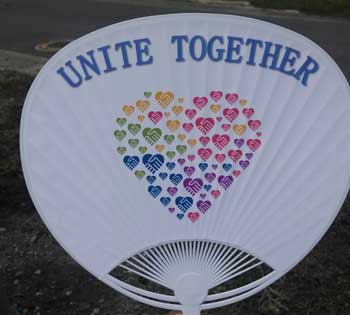 This is a fan made by Endo-San,​ which was given to all of the JET MIP participants. This was given to share the story to others and to have us stick together. In my eyes, this means that we should unite and continue to build the bridge between Japan and the United States.