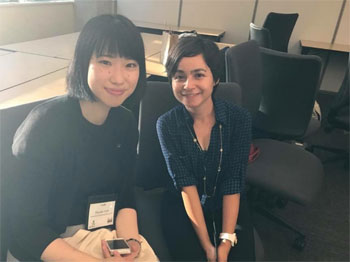 Konnichiwa! Hello. My name is Miyako Tada, a Japanese assistant teacher from the J-LEAP program. I came from Tokyo, Japan. I have been working at Dunsmore Elementary School in La Crescenta, California, for a month and a half and I teach Japanese to second grade students, to be more precise, I teach some second grade subjects in Japanese with my lead teacher, Erlewine sensei. I would be happy to know if you have some interest in the place where I live, my school, and Japanese education in the U.S. through this article.

State of California and La Crescenta
California is the third biggest state by area and has the largest population in the U.S. When I heard that California is almost as same size as Japan (it’s about 1.1 times as big as Japan) for the first time, I could not believe it for a while. What a big country! I can’t forget that surprise. There are many famous cities in California such as San Francisco, San Jose, San Diego, and Los Angeles. La Crescenta is located north of Los Angeles County. Many people might imagine blue sky/ocean, and beach when they hear “Los Angeles”. I was also one of them. However, La Crescenta is closer to the mountains and it is a bit far from the famous sightseeing spots or beaches of Los Angeles, but it is a very calm and quiet town surrounded by a lot of nature. My school’s campus is also full of tree and flowers, which I really like.

Dunsmore Elementary School
My school, Dunsmore Elementary, is a public school for students from kindergarten to sixth grade, and is operated by Glendale Unified School District (GUSD). This school district offers dual immersion language programs called the FLAG program (Foreign Language Academies of Glendale). This program allows students to study in two languages, both English and the target language in their classes. Japanese dual immersion program is available in two elementary schools and one middle school in the district and Dunsmore Elementary is one of them. The Japanese immersion program started in 2014 at Dunsmore Elementary and because of that there are currently only 4 grade levels for immersion students (kindergarten through third grade). Grades will increase by one every year until all seven grades are covered. Since our school adopts the 50/50 immersion program, students receive instructions in Japanese for 50% of the day and in English for the remaining 50% of the day. Each grade has 2 classes and 2 teachers, Japanese speaking and English speaking teachers. The language used in class instruction is “switched” in the middle of the day, so both languages are covered. This means that a teacher gives instructions to 2 different classes every day and it is one of biggest difference compared to non-immersion schools.

My Class
As I mentioned earlier, my lead teacher, Erlewine sensei and I are in charge of the second-grade Japanese class. My main job is to help my lead teacher and students during class to make the class run smoothly. We teach various subjects such as Japanese literacy, math, science, social studies, music, art and PE. Now, I want to introduce some subjects that our students are studying.

The main feature of this immersion program is that we basically use only Japanese when we are in class. This means that all of the class activities such as giving instructions, writing, and having conversations with students are carried out in Japanese. At the same time, the students are also expected to use Japanese during the whole time in our class even when they speak to their friends. However, I feel this is one of the most difficult points in class. We have a total of 46 students in second grade and our students have a very diverse background. Some use Japanese at home and some don’t. Some have experience living in Japan while some have never been to Japan. Some are so-called half, double, or mixed-race children and some are not. Because of their diversity, the level of Japanese ability differs from student to student. Problems happen frequently like students who are weak in Japanese and can’t follow the lecture. Therefore, we are trying to figure out a good way to close this gap using different strategies. For example, using a lot of visual materials, using easier words, splitting class into smaller groups, or teaching individually while one of us is giving the main instruction in class. Sometimes, I feel like using English because it is easier way to explain and understand each other. However, I am very happy when students finally understand in Japanese and they respond saying “Arigato (Thank you)”. This is the moment that I feel the most satisfaction from this job. I am a novice teacher now, but I want to keep improving my skills, and trying to make our class more comfortable to study and fun with Erlewine sensei for the next 2 years!